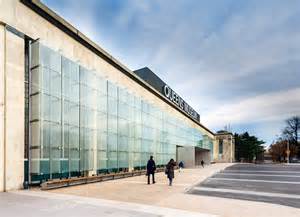 Ramones and the Birth of Punk

Released in April 1976, the Ramones’ self-titled debut album introduced the world to four unsmiling hoods in ripped jeans and leather jackets, and to the uncompromising attitude known as punk. Ramones’ minimalist tunes, slapstick lyrics, buzzsaw guitars, and blitzkrieg tempo became the wellspring for a genre of music and a strain of culture.

On this first album’s 40th anniversary, (…) the exhibition begins with the Ramones’ roots in Queens and reveal their ascendancy in both music and visual culture, demonstrating their remarkable influence on music, fashion, fine art, comics, and film. (…)

Like Warhol, the Ramones used branding as an art form. Art director Arturo Vega turned his iconic eagle logo into a pioneering range of T-shirts and other merchandise, and the origins of that now ubiquitous band symbol are traced. Vega also encouraged Dee Dee Ramone’s idiosyncratic paintings, several of which are on view.