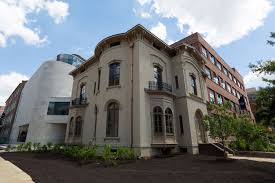 The Art of Lily Spandorf

Explores the artwork of Austrian-born watercolorist and journalist Lily Spandorf (1914-2000).

Working with pen, ink, watercolor, and gouache, Spandorf became known for the news illustrations she created for the Washington Star, the Christian Science Monitor, and Washington Post, among many other periodicals. Late in her career she became celebrated for passionately recording the transformation of Washington, D.C.’s urban landscape, especially the many red-brick, late-19th-century buildings facing demolition, being demolished, or whose historical contexts were erased for modern construction.

If you go or not, Lily Spandorf's Washington NeverMore  presents Washington DC through her eyes.